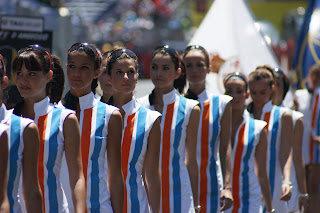 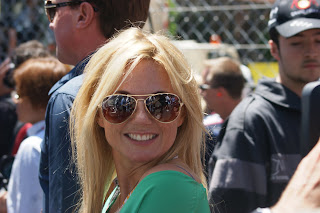 Qualifying certainly  didn't disappoint...it had everything..What looked like a horrific crash for Perez...coming out of the tunnel and losing control, smashing into a barrier side on...after a long delay, it appeared thankfully he was OK no broken bones but heavily concussed, so I believe he wouldn't be allowed to race the next day.  These modern cars construction are a testament to safety first.....incredible.
Once again I had access to the track side...the roads are so narrow..the speed of these cars shaving the barriers.is just amazing....such speed I can't comprehend...
There is one straight I stayed for a while, behind me were all the boats with their guests..champagne and canopes...in front, a huge towering grandstand packed..water and sun creme...very colourful..
It seemed that Hamilton didn't really have enough time to post a serious time after the crash delay..another mixed weekend of emotions for Mclaren...I'd love to be a fly on the wall in the inner sanctum of the Mclaren motor home..mind you...I think even flies wouldn't get past the security!!
Sat night caught the train to Nice...beautiful 20 minute journey along the coast .  I was met by an old friend Belinda whom I studied with whilst on an exchange in Baltimore.She drove up from Saint Tropez. Her friend in Nice had just bought a boat that day...so we christened the boat with champagne..and a little trip...followed by a lovely meal in harbour restaurant.
Sunday
Really was looking forward to the day...started well, after breakfast picked up my camera from my room waited for the lift..doors open with Schumacher and Vettel inside!....heading down to reception.to be taken to the track ..10 second lift ride with the old guard and new guard!
I can report that Vettel eats bread and cereal for brekkie...and probably raw meat!!
I went straight back to the Monaco Automobile Club  and finally managed to get the President to write a piece...he said that.. for him F1 is the greatest event in the world...in Monaco you can times that by ten!
I would have been so disappointed if I had failed to get him to write...went into his plush office...trophies and wood polish everywhere!..
I then rushed back to paddock after a call from Williams that Patrick Head would be able to write his piece at 11.  Nice guy ...wrote about how special Monaco is to the team...although believing that Williams should have won more races than the 3.
Lovely Hospitality from Williams too...as with Virgin Marussia, my next port of call to wait for Richard Branson..he was delayed by over an hour.
Just a very brief time with him...he spoke about the great times in previous years he's had during the Grand Prix .
Then sprinted to the grid side...just arrived in time for the Grid walk  as all the grid girls were taking their place.
In a matter of moments the grid filled!...I'm amazed they weren't dragging people from under the cars...as they were pushed into their starting place....actually it's the big hand held TV cameras that pose the biggest danger...
I just had to look at the direction the cameras were all facing....often towards...Geri Halliwell...and an assortment of Celebrities...Boris Becker looked like he gave everything to a party the night before!
One thing...when we watch the race on TV...obviously we cant smell the engines firing up...and also the strong aroma of perfume!...quite a potent mix!...An interesting contrast...
We get 30 mins on the grid before we are ushered off...took some great close up pics of Hamiltom trying to keep cool...very hot day.
Prince Albert's bride to be Charlene was the total centre of Attention...not sure how miss Halliwell felt about that!!
I walked around the track a little to catch the start of the race on one the massive screens dotted around.
With around 8 laps left queued up with photographers again to get a place opposite the podium...this is a unique race in many ways...not least the Podium...its pretty much on ground level...with a small stand erected opposite for photographers....tiny stand for so many!!!....I'm amazed I managed to get, not only into the stand but also a good view....one has to be focused and as single minded as a driver!!
A beautiful and serene Royal podium as were the royal family...another great contrast to the excited..happy.. sweaty drivers...great scene..
Across the big pond next to Montreal.....
Posted by Formula 1 official artist at 10:04