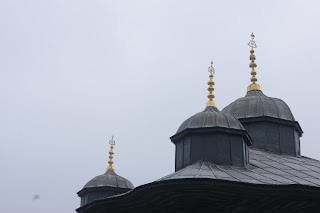 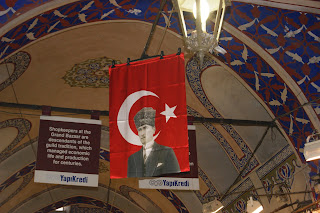 Firstly...I have renamed the capital Icetanbul!...10 degrees cooler than London.
This was a surprise. Wednesday night I stayed in a lovely chic boutique hotel W in a non tourist  part of Istanbul Spent the whole of Thursday walking around the city...what a delight..Topkapi Palace with its beautiful decorative Isnik tiles..this will form the base of my Turkish Panel...then the big Mosques.and more beauty within!
Also discovered the Grand Bazaar!...grand indeed..a labyrinth of market treasures..bought some great fabric...so a good day was had and I forgot about the cold...or perhaps it was the Turkish chardonnay that erased this from my mind!
In the evening a driver took me to the Crowne Plaza Hotel near the circuit in Istanbul Park about an hour from the city on the Asian side.
All the teams are staying here as its the only hotel near the track.

Friday
Picked up at 8 bound for the circuit. I must say its great to have the teams stylish motor home back for the European races..they seem more welcoming..more user friendly. As does the paddock here/
the circuit is unusual as its anti clockwise...thus creating different challenges for the drivers with left hand turns/
I have a standard routine now..when I arrived I introduced myself to the Management ..CEO and Chairman.
The Chairman..Mumtaz wrote a nice piece for the artwork...he also said that he will introduce me to the Sports Minister on Sunday...the PM is not coming...having raised the bar somewhat with the Malaysian PM writing...its a little disappointing!!
Had a great chat with the Pirelli management,,promising to introduce me to their President on Saturday, very accommodating,,,never ...tyre...of meeting them!!....horrible pun!!!
Got back to the hotel,lovely meal with some of the Formula 1 management staff..then we retired to the bar. to be joined by John Button over 4 large glasses of wine, and many anecdotes about his son...I could have stayed all night...Jenson was certainly driven and single minded as an 8 year old, Karting.
At that age he told his father he wanted to be world F1 Champion...so what went wrong!
His father certainly likes to indulge...lots of parties ...then a race breaks out!
Cant wait for Monaco!

SAT
Another early start,  received a message that the Pirelli President would meet me at 12.
He wrote about his warmth for the people involved in F1...very pleased with that!
Also I am another step closer taking prints from Pirelli tyres.../to be continued!........
Its so nice also that I feel more and more a fixture within the paddock...walking past Tony Fernandes and Eddie Jordan..both greeting me...I can get used to this..
There are murmurs that this could be the last Turkish GP for a while...allowing a slot for the US GP in Texas next year/
The race weekend hasn't captured the imagination of the Turkish people...not so well attended, thus far ...but perhaps tomorrow more may come. and the weather is improving!!...all bodes well for a great race!
Posted by Formula 1 official artist at 09:31