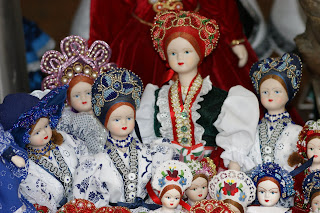 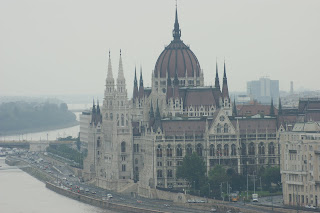 Thursday...
There is beauty all around this old troubled city...the beauty I see is in the decoration..the intricate attention to detail on the street lanterns..floral patterning on the buildings..can't wait to incorporate these in the painting.
Just finished walking the entire city...can't remember how many bridges I crossed!..very impressive parliament building and the museum of modern art high on the top level looking down on the city below..also across the river my hotel , the Marriott...best view from my room overlooking the river...and the big new statue of liberty.
Unfortunately the weather again is poor!...wet but thankfully warmer than Germany!...great Goulash Lunch. found a little side street restaurant..always think the best restaurants are located in the smallest streets.
Lots of coach parties...saw some Koreans being conned and tricked out of the money by a magician with 3 small vessels and a ball..yes that old trick!...it's a good income for these con merchants..
Walking down the Jewish quarter and ghettos, one can in a tiny way sense the pain and suffering the Jews must have felt...(not sure why..but there is a definite feeling)... during the war as they were rounded up and taken to the camps..this pain seems graphically etched on the dirty tired buildings.
Bought some great local fabric for the work...lots of lace and colourful stitched flowers..table clothes...not sure I'd like that on my table ...but then I'm cutting up the fabric...sacrilege perhaps!
I could spend a week taking pics here. To the track tomorrow..forecast is better..I hope!
Posted by Formula 1 official artist at 09:10 No comments: 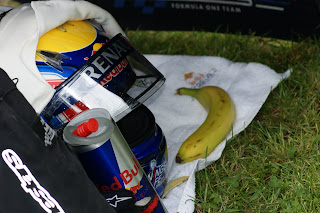 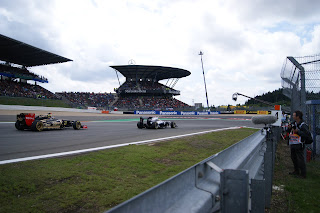 2 days in London leaving Wednesday, looking forward to seeing Budapest too..
Posted by Formula 1 official artist at 05:44 No comments:

Race weekend at the Ring....

This part of Germany has it's own take on the Tale of the Ancient Mariner.....Trees Trees everywhere......and plenty of water too..!  The old castle looks over the Nurburgring, the locals say if you can't see the the castle then it's raining....if you can see the castle then rain is on it's way!...
Friday.
Arrived to the track early to walk around the Fans Zone...this enormous shopping centre dedicated to all forms of Motor racing....DTM the German touring cars is also popular here..but F1 is the daddy!...The German fans I noticed like to show off their sartorial creative team outfits...with images of the German drivers all over..silly hats too...all very colourful..took some pics of them I'll post a pic.
One does feel as sense of history and heritage attached to this race track..there are many reminders of this in the form of old photos and piped commentary...it's great..It really adds to the event
The night before Mercedes put on a BBQ for all the teams...nice food and wine...many teams and there drivers were there relaxing despite of a dubious singer blasting out Robbie Williams classics!!
The two practice sessions gave me an opportunity to walk the circuits inner track ..wearing my Photographers tabard..great shots of the many tight turns  slowing the cars down thus enabling me to get some great pics with the mighty grandstands as a backdrop..all full for the first practice.  There is a shuttle bus that takes the photographers to different parts of the circuit..very civilised!
As there are 6 German drivers..the home support is extremely vocal..great to see and hear..although the majority of support is for Schuey and Vettel.
Saturday
Had a call from the Circuits CEO's office to meet him Jorg Lindner at 11 for him to write his piece..nice guy..he had spoken previously to Mr Ecclestone about the art project, a great thoughtful piece...he has transformed the look and layout around the circuit ..2 new hotels...this shopping complex...a huge roller coster that passes through the inside village...doesnt work at present due to technical problems with vibration...so un-German!!
Great meeting with Pirelli..about the art event inking tyres at either Monza or Interlagos, Brazil.
Pirelli have a nicely laid out Motor home...black walls with there bright yellow name-logo..very striking.
The quali was very exciting..managed to find a good spot half way around the circuit to take pics..so many big screens so was able to follow the positions.
Back to the resort village..cows all around..but lovely Argentinian steak on the menu!

Sunday...
Should be a good day's racing with Webber on pole and Hamilton just behind..rain is forecast all day...the stands do look more colourful in the rain ..although the paddock tends to empty..all these VIPS develop this allergy to rain..wouldn't want it to dilute their Bubbly!
Off the the fans zone now....
Posted by Formula 1 official artist at 01:23 No comments:

Thursday...
Just arrived at the circuit after spending the day with Julia..local guide and great company..good German egg!..first impressions..
A mighty circuit...huge ...enormous grandstands...facilities..best I've seen so far, the fan zone is all inside in what looks like an enormous shopping mall...packed out! and it's only Thursday.
Apparently there has been a lot of new development creating a very impressive complex...so much for the fans to spend their euros..
I arrived to the accommodation around midnight. last night..delayed flight.
We are staying in this Lindner hotel and resort village..masses of swedish style shalets..all different colours...it's where teletubbies meet butlins!..if one can imagine that!
Great...very comfortable, self contained houses...all the teams are staying there too.
I was driven around the villages in the vacinity of Nurburgring..a.little like silverstone...lovely little hamlets with there particular architectual style.
Trees everywhere...we are deep in German forest here...apparently the locals call the track ..Grune holle.....Green hell!.so many trees!..coined by Jackie Stewart long time ago.
The Old circuit has a strong presence ..something like 23k in length..it's still in use.
7pm ..meeting the CEO now in the new Lindner Hotel..then mercedes have a party...
Talking with Pirelli tomorrow morning about the Monza project...
Posted by Formula 1 official artist at 09:49 No comments: 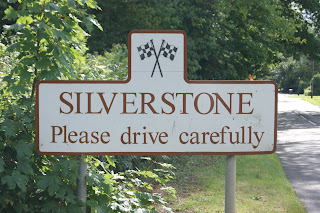 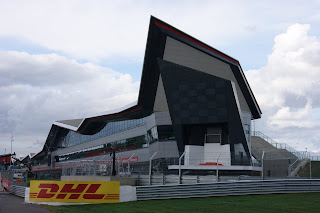 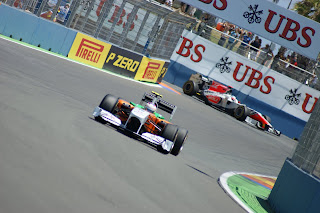 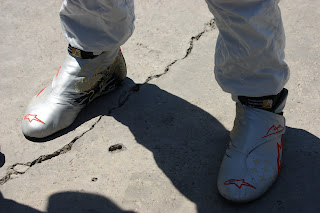 My computer died after Valencia...drowned on sangria!.. or maybe something to do with the fact it has to process upto 1000 pictures I take at each race,,,,.very late European GP Blog...
The weekend was memorable in so many ways..perhaps not the race..bit of a procession, but one cant blame red bull for that..they just power on.  The attention they receive is amazing..where ever Vettel is ..whatever he's doing there are a mass of camera's and reporters.
I've been taking pictures of the drivers feet..footwear, fascinating!...My camera was the only one trained on their feet in the Paddock....took a great pic of Schumacher's feet astride a crack in the paddock...now that says something......I'll post that pic.
The build up to the quali is a great time, . I walked down to the circuit from the hotel, it's great to join the crowds gathering..one gets a true sense of the event..and Ferrari flags...and Alonso t-shirts!....Barcelona revisited! Also wanted to walk off some dodgy local white wine from night before!...
I collected my photographers Tabard from FOM office, and walked the path around the circuit...it's an odd thing ..even though I have the correct photographer passes etc...some security see the size of my lens and don't take me seriously!...they see these huge long lens, that weigh half a ton ....I couldn't say in Spanish.. ...'It's not the length that's important'!
Got some great pictures of the cars with big boats in background...as I walked around the inner fence which is quite high 7 ft or so..the tiny marbles from the tyres manage to make there way to the path...they are tossed over the fence..amazing ...looks like flattened insects..
Had to rush back to see Natalia, assistant to the CEO.She was lining up all the relevant people to write in my book during the race on Sunday.  Her little office is just under the Podium next to the Pits..there was a GP2 race going on...not a great place for Management office....couldn't hear a thing she was saying!...I'm learning a form of GP sign language this year!
The heat and sun was so intense...beautiful dark blue sky.  I was able to find a local shopping mall for some typical Valencian fabric to place in my work..although the store assistant believed it was for me to wear...this very feminine floral fabric!..difficult to explain it was for an art project...
beautiful material..very happy about that.
Had dinner in lovely old town of Valencia..caught Mr E coming out of our hotel. I do keep seeing Vettel in hotel lifts I happened again..he must think I'm the phantom lift stalker!...
Sunday follows a regular patten for me, the grid was so busy... When the teams push the cars into place that a great time to look into the helmet of the drivers minutes before the off.  Mr E was with Placido Domingo and the Lady Mayor of Valencia showing them around the grid..the mayor was to write a nice piece up in the VIP suite. These people are so happy to write their thoughts and feelings about F1.
, ..another dash the the airport ...great everybody on the F1 JET arrived early...so the plane left early!...how refreshing ...
Next race ..British..can't wait...wont need my passport this time...
Posted by Formula 1 official artist at 02:30 No comments: