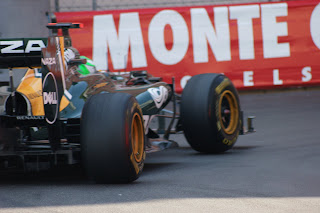 Race weekend has arrived...its incredible the amount of people that pour into this tiny principality. 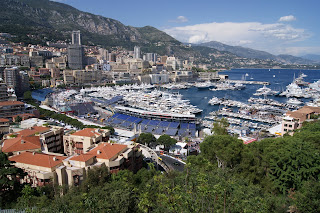 Friday was no F1 car day, GP2 were racing in the morning...then in the afternoon the track is open to the public again...amazing operation ...around the famous Rascasse bend; masses of tables and chairs come out and a huge bar breaks out....on the track!  then it will all be cleared for racing again in the morning.
Just before the circuit was opened;;the 3 top gear guys were given access to the track, racing touring cars...top gear has a mass of clout these days!
Yesterday I managed to speak to the President of the Monaco Automobile Club, but he couldn't write...hopefully he will today.
Walked up to the Grimaldi Palace overlooking the whole circuit...quite a spectacular view!...a little toy town village up there.. I do keep thinking back to Thunderbirds!....even the castle doesn't seem real...somehow it seems to have less gravitas than other castles..
Big press day...not sure the drivers like these days.. they have to fulfill certain a number of obligations to sponsors...saw Button and Hamilton walking down the paddock with a model between them waving the chequered flag...then the photographers wanted the drivers to wave their arms...at this point I heard Lewis say....`Are you serious!!.....don't blame him...but then if I were being paid millions..I can wave my arms!
More big boats keep arriving ..they just keep squeezing them in..
Have a meeting at 12-15 with Richard Branson, writing his piece, should be fun. cant wait for qualifying at 2....
Posted by Formula 1 official artist at 00:44