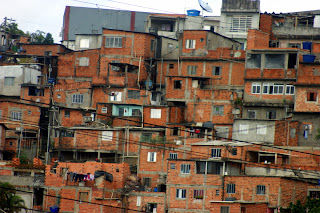 What a day yesterday in Sao Paulo...more cars than I first thought!  fast cars would be completely wasted in this city..which I guess is why the F1 here is so popular...they can dream of changing into top gear!

I had a driver pick me up from the hotel in the morning..thankfully in a standard Chevrolet car, I had a list of various places..I did slightly feel like I was part of one of these coach tours where the people stay on the coach and are allowed 5 Min's to get off and take pics!
The trouble is here there is nowhere to park so the driver would leave me then circle around the block until I was ready...

I get the impression that this city is on the verge of a mass building program..lots of skyscrapers planned downtown, there are a few in the business area.
A couple of stunning buildings...the Municipal Theatre and the main Cathedral..lovely ..curious railway station, built by the British...looks just like paddington!
One notices a city of contrasts still lots of poverty ..went passed the fevelas, network of shanty towns, very poor areas, some fairly central too not just in the suburbs.
One thing that is very striking here is the amount of Graffiti..not just words but many painted figures on walls and sides of vast buildings.....Now I know where Banksy took his ideas from!
Managed to take lots of pictures...lots of parks too where the middle classes live very close to the trees.
Took some great pics inside the main samba dance school with all the colourful costumes..so pleased I discovered that!


Back at the hotel, I grabbed the newspaper to to a nice article in the sports section..very big headline...Mark Dickens Formula 1 artist. next to a pic of Massa.

Went to the track around 4 to catch the CEO of the circuit..wrote his piece straight away..Mr E had spoken to him earlier, also Mr E's girlfriend,  used to work at this circuit, she is from Sao Paulo.
Didn't really see much of the track, will see more today ....

Posted by Formula 1 official artist at 02:11