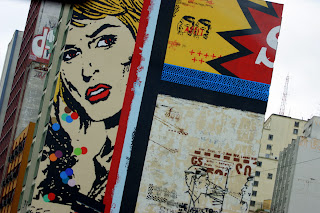 Thursday
Arrived yesterday morning from a night flight...it seemed the whole world arrived
at the same time...so busy.
Hour and a half to the hotel..just the sheer weight of traffic...Sao Paulo has a population of
22 million, so there must be around 3 million cars...apparently congestion is such a problem
here they limit the traffic on certain days, you can only use your car 4 days a week depending on your registration plate.

What was noticeable on the journey to the hotel were the masses of hastily built towering apartment blocks all dotted alone the skyline.. a blot on the landscape ..quite unattractive and built to ease the massive homeless problem.

The hotel TransAmerica is quite close to the track, went to the track in the afternoon..what a contrast to Abu Dhabi!

This circuit has been racing for 40 years....well established and well liked..but seems to me that not much has advanced, it has quite an endearing quality...almost like stepping back in time...the team hospitality's in the very narrow paddock are basically huts!

If the paddock gets busy..should be fun and cosy!...it sort of reminds me of a giant scalextrixs circuit.

Just as I arrived  a journalist from the Sao Paulo newspaper...O Estado de Sao Paulo, came up to me in the paddock to ask for an interview and write a piece coming out today.
He knew who I was and liked my work and the whole story of me being here as F1 artist.
Looking forward to seeing that...although in Portugese,,,,
Really nice guy livio, he has been covering F1 for many years..I'm sure he has a few stories to tell!

The track looks similar to Barcelona set in a undulating bowl..good for spectators, not too much advertising in the city ..Didn’t see any banners flying.

Looking forward to walking the track hopefully this eve.
I was speaking to some local journalists who believe a huge makeover is due and will happen with the new money entering the country.

Been warned not to venture out around the city alone..lot of the drivers have bullet proof cars.
I have a driver today taking me around the city....hope he pulls up in an old banger!....not a smart black merc...sore thumbs and sticking out come to mind!!

Posted by Formula 1 official artist at 00:39