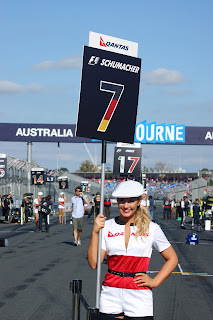 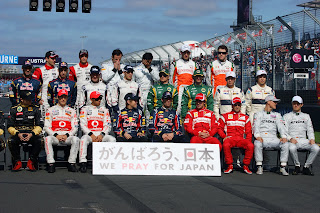 The much anticipated opening race finally arrived with great excitement, walking to the circuit I had a Paul Newman moment...I remember his film as a racing driver...and the build up of excitement began to grow..the PA system throwing out announcements...the mass crowds approaching the circuit....the smell of hot dogs..the merchandise sellers...certainly sent a tingle down my spine!
When I arrived I first had to pick up my Grid pass....there was a lot of activity building up to the race, I needed to get into the pit lane to take pics of the garages and to photo the minute silence plus the drivers parade....what a srum there was for places...initially the steward wouldn't let me through....think he saw the size of my camera compared to the photographers tanks!....I then had a case of lens envy!!
Managed to get onto the grid and track. and stayed on the grid ..all the pit girls arrived first...then all the teams and cars ..film crews..etc...So many people on the grid!...I was so aware of being very careful of all around me..I did get shoved out of the way unceremoniously by a south American commentator as she was speaking live!
I think I'll feel more comfortable  on the grid as the season progresses. I took loads of great pictures, I did feel privileged to be there.When Webber arrived on the Grid the crowd went crazy..their man!
Saw most of the race in the Ferrari Motor home, a few laps before the end rushed to parc ferme, which was directly under the Podium.
The paparazzi take no prisoners I can tell you!...still manged to get good shots from the podium.
Next time I know what to do!..
What a great opening race..2 hours after race left for the airport...23 hour journey back, after 5 days in Melbourne..good to get the longest flight out of the way!..
To sleep now and one week in studio processing all pics, staring the Australian panel.
Next race Malaysia, leave Tues 5 April....can't wait!
Posted by Formula 1 official artist at 23:50