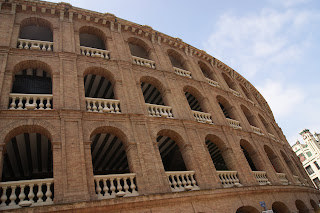 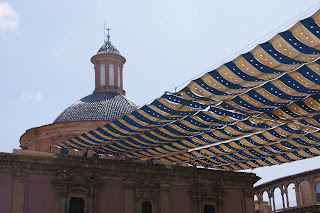 Thursday morning...
Flew in yesterday lunchtime on the F1 Jet 146 from Biggin Hill. Amazing.... arrived at biggin hill..departures, one room with a cafe and a tea lady called Betty!....so relaxed walked onto the plane,  such a lovely small jet..very comfortable too. Seat near the front , the cockpit was all open so had a great view of take off and landing..didn´t seem real. felt like I was in a simulator!....as we were about to land I took a pic of the cockpit ...thought I had turned the flash off!...could have been tricky landing!
FOM technicians and management were on the plane..in flight food..bag of crisps and a kitkat..
From landing , it took 10 mins to the car to drive me to the hotel..what a treat!
Hotel Westin, beautiful relaxed Hotel near the old part of the city...apparently many drivers are here too...maybe catch some in the lifts again...incidentaly the lift manufactures are called Schindler....Schindlers lifts!!
Last evening I was invited to see the new Cirque du Soleil in town with some guys from F1 management. The founder Guy Laliberte gave us tickets in Montreal..what an unexpected marvel!...fantastic..I would run out of superlatives to describe the experience...pure art!...beauty ..drama..theatre..colour...caressed all the senses!
So many layers..all what I want to achieve in my paintings...what a great start to Valencia..
Off to take pics around the city now..a great pleasure!.....then to the circuit later...
Posted by Formula 1 official artist at 01:48 No comments: 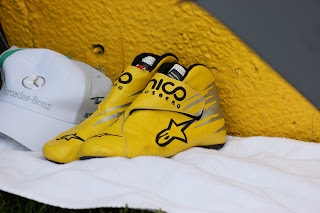 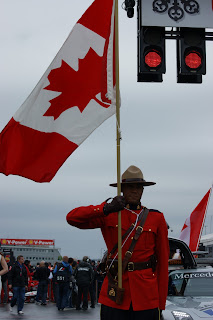 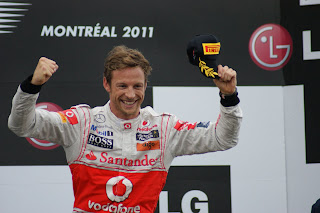 Well what a day ...Sunday in Montreal. Apologies for delay.
So many firsts for me and indeed the teams, heavy rain was forecast..and as the Montreal folk are obsessed with the weather they dare not give out an incorrect forecast...
The rain stayed away in the morning but with each hour that passed it look ominous, the rain clouds were gathering.  The teams hadn't used extreme wets in a race this season, I noticed more activity in the Paddock, more team meetings than usual..all focused on the tyres...Pirelli were at the centre of all this of course.
As were the TV crews all wanting inside information..the paddock is so tiny...chaos ensued for a while!
The rain came down in torrents before the race. As the grid girls were led to their positions, it spitted with rain..enough for them to hold up umbrellas in the beginning.
I was fascinated by the teams driver rain packs!....chamois leathers...dainty little rubber shoes for the drivers as they dismounted keeping their racing shoes dry...lots of towels ..its a military operation keeping everything dry..amazing to watch close hand.
Apparently there were still masses of water on the track..so a rolling start behind the safety car was expected.
Actress Julia Roberts was due to come..I waited to see her on the Grid, but subsequently learnt that a car was waiting outside her hotel but she didn't want to leave as it was raining!.....never rains in Hollywood!
I did see Colin Farrel getting a lot of Attention, I also saw Manchester United footballer Michael Carrick getting No attention....
Just as the National Anthem started and sung by Canadian singer Ima, I quickly moved the the front of the grid to take pics of her singing flanked by 2 beefy Mounties.  She would later write a piece in my book for the artwork.
The grid became very busy, but left a little early because I had to go to the  Circuit  President's suite in the Paddock Club....and wow...they had lined up literally all the important dignitaries to write their pieces for my artwork.... Government minister of Tourism.... Minister of Finance....Mayor of Montreal...President of Canadian Motor Authority..and the Charming Ima, who gave me her new CD.....Big fan now!!!
By this time heavy rain was falling...2 hour delay...so I stayed a while in the suite chatting to the Ministers and their families...giving out posters of my work.
I then donned my Photographers tabard and and took a position at the first chicane....I needed to take some pics of the cars in the rain with the dramatic spray...I wasn't disappointed.
When the rain finally ceased there were many laps with the cars behind the Safety car...much to the annoyance of the crowd...they were getting fairly vocal showing their frustration, feeling the cars should start racing....
An exciting race indeed, although as I've been doing each race,  with around 5..6 laps to go queueing up with the snappers for the Podium shots. We were waiting at the gate behind the Podium...I noticed that the German flag had been put in the first place position..already!...so confident they were that Vetell would win...well we know what happened.... then a frantic rush to switch over the Union Flag...very funny!
A tower was erected for the photographers ..so we were all in line with the podium..great shots
Beneath me was Lewis Hamilton watching on....penny for his thoughts!
The race finished at 5 ..so no time to hang around, straight to the Airport.

Valencia next week....Travelling on the F1 Jet...146. Looking forward to that. Leaving from Biggin Hill.
Posted by Formula 1 official artist at 07:24 No comments: 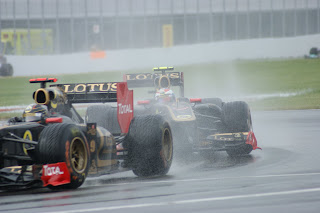 Firstly , just corrected some errors from Previous Blog...thanks Tommy!
It's a cool wet day...looks like heavy rain and thunder expected during the race...first use of the wet tyres ...should be eventful and exciting.
Yesterday the rain didn't materialise, although overcast it stayed dry throughout qualifying.
Lots of Activity in the Paddock...took a great picture (I'll post it on Blog) of little Hamilton with a 7ft basketball player!...hope Lewis didn't strain his neck!..apparently Ice T with with them too.
Ex F1 driver Jean Alesi was talking to Emerson Fittipaldi who is a  race Steward, I was told that lots of ex drivers love to come to Montreal. There were a delegation from the new Texas circuit taking a look around...although they didn't ask me any questions!...missed a trick there!
During quali I went for another walkabout in my photographers tabard..great access trackside..I was stationed at the first chicane, behind me was a huge packed grandstand full of vocal supporters, seems most were supporting Ferrari, I guess from the Villenerve days.
Had a brief meeting with Francoise, Circuit Chairman about him penning his piece. 1-30 today during the race. Also the Mayor and a government minister, also apparently there are some celebrities coming ..all very secretive..watch this space ..as they say....
Posted by Formula 1 official artist at 05:47 No comments: 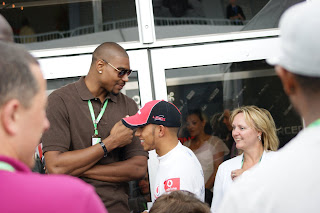 Sat morning just about to catch the media shuttle to the Gilles Villeneuve circuit. its a great short journey..as the circuit looms closer you see more people  slowly making there way... like the pilgrims approaching mecca..thousands!....racing is certainly a religion here...street parties everywhere...TV companies can't get enough...more popular than Spain, didn't think I would say that.
Yesterday, first and second free practices, in my very humble opinion I believe too much emphasis and importance is put on the team placings....I think the teams tend to play mind games too...holding back a little as Ive said before, this was more evident yesterday, although Vettel crashing as is customary in practice wasn't planned I'm sure.
Such a hot humid day yesterday, I arrived at the circuit picked up another photographers tabard to wear as it's another street circuit; it's difficult to navigate....but with tabard  I was able to follow the path around the track...I must say the path in some areas is so narrow with little space between the track and the St Lawrence seaway...quite an adventure..  saw a beaver too!....
The grandstands were almost full, amazing for quali...these French Canadians are devoted followers and very knowledgeable too.
The circuit is built around the old Olympic park used for water based events, rowing etc. There was also a big Expo there, what remains is a huge Bio-Sphere built by the Americans as their pavilion..this is now part of the Montreal skyline...it's a thing of Beauty, will deffo go into my painting.
Back in the Paddock, because it's so narrow, one can hear all the conversations between TV commentators ..teams...There was a lot of excitement around Sauber when Pedro de la Rosa appeared as a new driver....moving from Mclaren...I followed 'Crofty'... David croft from BBC 5 live as he managed to interview De la Rosa walking down the paddock....a remarkable feat considering there were so many people in the way...these commentators have developed a way of clearing the path ahead with their arms...I like to photograph them do this...it's a sport within a sport!..
Posted by Formula 1 official artist at 06:48 No comments: 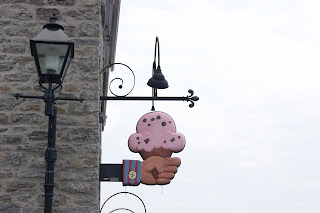 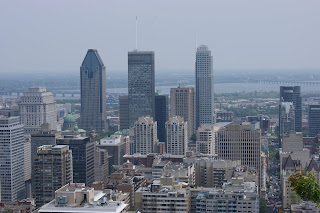 Thursday June 9th
Here I am in French Canada..Quebec.   It really is all French. I must say I wasn't expecting everyone to speak French and not much English...I like it..North America meets Europe....even the morning bacon is laced with maple syrup!...
I arrived last night into a storm..quite literally..apparently the worst storms..rain..thunder and lighting in 50 years...the airport was closed for 3 hours...which in Canada is most unusual. given during the winter a million tons of snow is dumped and the airport stays open!
The plane couldn't land for a while, but not much of a delay..the hotel was around 20 mins from the airport.
This morning I went straight to the track, there are regular shuttles to the track..only 10 mins away, really close and parallel to the port and St Lawrence seaway. Tiny Paddock very narrow, met the President of the circuit and Montreal  motor federation, Francoise. He had received a letter from Mr Ecclestone so he knew all about my project and requests...he already has himself lined up to write as well as the Mayor of Montreal. and a government minister. and a beautiful singer for the National Anthem...great!..so with that taken care of I headed downtown to take pictures....fantastic that I could walk everywhere.these days I spend taking pics of the City..I've never walked so much...on my 3rd pair of trainers!..lovely old quarter...lots of Jazz...like a mini New Orleans..may go back there later...not sure about the beers here.....Bud Light...they are a sponsor of the race so all the hotel staff are decked out in the Bud colours!...not sure about that!...guess it's good business for the Hotel Delta.
The people of Montreal absolutely love F1..they turn up in their thousands even today ..non race day..just for the driver autographs.....
And Mr Ecclestone arrives this evening into another storm so to speak....more Thunder and Bahrain!!!
Looking forward to getting a good view of the circuit tomorrow...from first brief viewing an attractive track...lots of water and trees ...
Posted by Formula 1 official artist at 15:29 No comments: